The Place – The Dingle Peninsula

Fáilte, to the Dingle Peninsula/Corca Dhuibhne

The Dingle Peninsula is a hive of ancient history and contains some of the best scenic views in Ireland.

Rolling hills and mountains surrounded by the rugged Atlantic coast line that has been inhabited for thousands of years  by a range of peoples dating back to the ancient Celts and today by a community of people that have been able to uphold rich traditions of the past.

The people of the Dingle Peninsula still maintain the ancient Irish language as their first language. The farms are still past down from generation to generation and cattle and sheep roam freely on the green and lush hills.

So untouched by tourism till the late 1970s that much evidence of its Celtic past can still be seen. Many farms still have historic beehive huts once inhabited by druids and Celtic tribes on their land that despite the wild Atlantic weather are still intact.

The dingle Peninsula is home to many artists poets writers and creators  as the environment just lends itself as inspiration to most creative people. Its history of story tellers has led to the publication of the works of Irelands great orators and there old texts are still used in schools today.

The magnificent coastline of steep sea cliffs, sandy beaches and dramatic headlands makes it an essential destination on the Wild Atlantic Way.

The Blasket Islands lie to its west while its beautiful villages are a must see for any visitor to Ireland.

Steeped in culture, literature and tradition it is a place where  a warm welcome is always waiting. 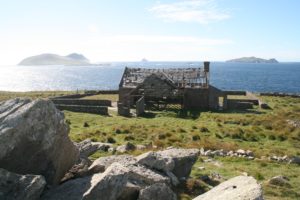